Might it be that the way for us to thrive and flourish in these disruptive and complex times, is to go back to the wisdom of our ancient ways of communicating!

“Mo everything you talk about is just common sense!” said the Chief Information Officer of a financial institution. It was about three hours into a two day retreat with the executive team.  They were in the middle of a major merger and feeling the stress of the disruption.  Immediately the Human Resources Vice President commented: “If only people used common sense in this merger, we wouldn’t have to face so many crisis every day – it is driving me crazy.”

As I listened to the group natter back and forward about the lack of common sense they were observing across the organization, I had an insight that I shared with the group.

“What if the term ‘common sense’ came from the days when we lived in villages and when we had a community problem – we moved the sheep off the common and invited ALL villagers to come together and talk until we had made ‘sense’ of the situation and co-created a vision and actions to resolve the issue.” 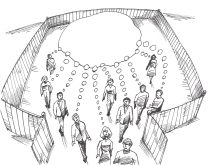 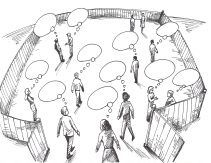 Gathering on the common with all who have an interest.

When we left the common – we had a shared view and understanding of our collective response.   We had created for our community – ‘common sense’ for the specific situation we faced.”

People are relational beings and as such our conversations help us to make meaning of a situation – we socially construct our reality by the words we use and the metaphors we create.

In our interconnected, complex lives we are constantly being brought together to quickly resolve issues by creating innovative solutions. Often people don’t take the time to create ‘common sense’, a common understanding,  we forget that we are coming from different villages. In these villages we have different definitions for words – we speak a different language. We need to slow down, be mindful, get to know each other’s perspectives. Be open to exploring and apprecitaing how we each view the world. Share the meaning of our words and phrases – co-create new meaning to our words and ideas before we attempt to create solutions.

In the spring of 2015, I was invited to participate at an Aboriginal circle facilitation training led by an elder. It was a great honour to be invited to be part of this learning event.  During the session I felt that I was with my ‘tribe’ – the principles and assumptions of Appreciative Inquiry (AI) were present in all that we were learning.  I left the session with an insight that while the teachings had been about First Nations traditions, much of it felt natural. I found myself reflecting upon the question: “Could it be that we are all part of a some indigenous group?”  My Irish/Scottish background connects me to the Celts  (my background is Celtic) and that perhaps in this disruptive time I might learn to tap into my indigenous wisdom.

A recent example of the power of tapping into our indigenous wisdom is the story of how the leaders of the 2015 Paris Climate Conference reached consensus for their final agreement.  About two days before the end of the conference they had over 900 contentious issues to resolve. A breakthrough in their communications came about when the Conference President and French Foreign Minister Lauren Fabius introduced the South African process called ‘indaba’. The term means meeting or gathering of leaders which is made open to the larger group even if the decision making power is in the hands of the leaders.  Minister Fabius called the session “Indaba of Solutions”.

In the process participants were asked to avoid giving general statements, and to share stories that got to the heart of their main concerns.  Complex issues were addressed, people felt respected and heard and consensus was reached.

The indaba method is solution driven:   (1) everyone must speak personally; (2) they state their ‘red’ lines; (3) provides a common grounds solution. An explanation of the indaba method.

She is a learning partner, facilitator and speaker. Maureen is a founding partner of Innovation Works - www.innovationworks.ca. Follow her on TWITTER: @momckenna and on LINKEDIN: www.linkedin.com/in/maureenmckenna or EMAIL: mckenna.maureen1@gmail.com
View all posts by Maureen (Mo) McKenna →
This entry was posted in Uncategorized. Bookmark the permalink.